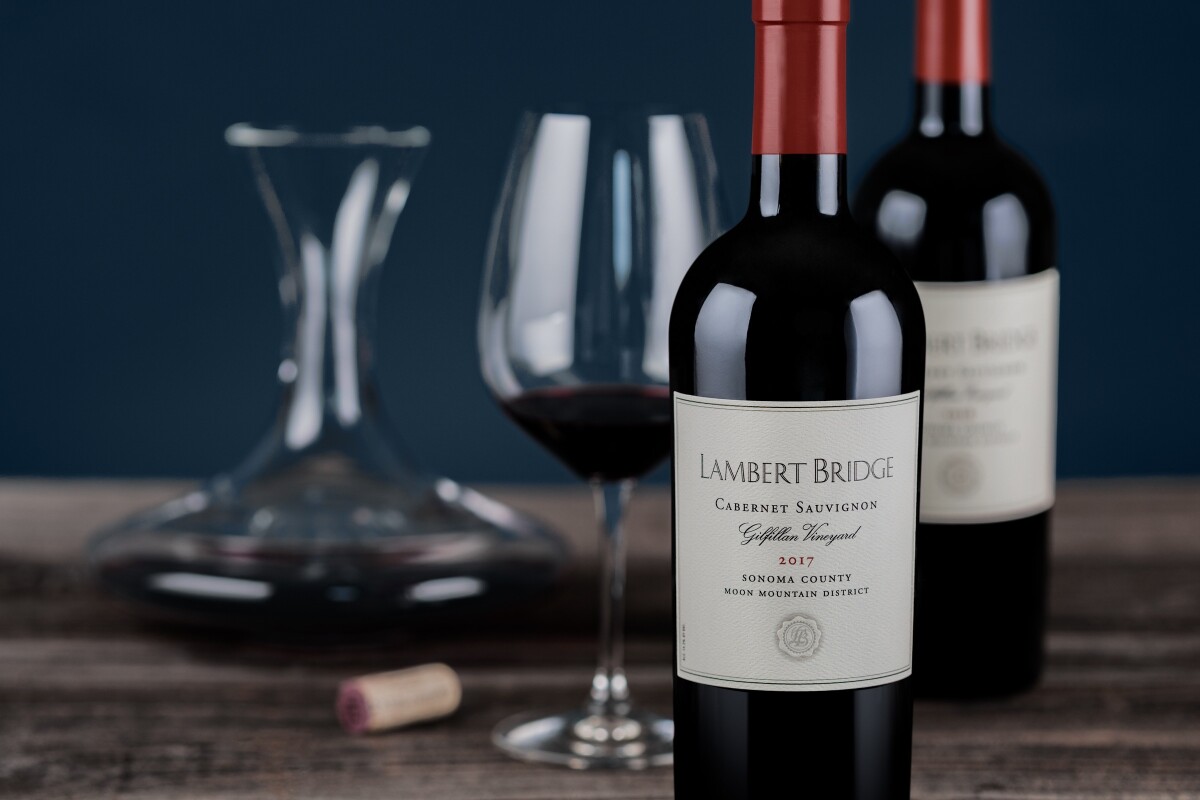 For the past decade, we have been working towards this moment – our opportunity to share the single most anticipated new release in the history of Lambert Bridge Winery.

A Trifecta of Perfection

Located more than 1,200 feet off the Sonoma Valley floor, Gilfillan Vineyard Cabernet Sauvignon has been a decade in the making.  Beginning in 2006, we began scouring Sonoma County for the perfect vineyard site for Cabernet Sauvignon.   We knew we wanted a location that offered a trifecta of perfection – a place that would allow us to grow world class grapes – steep hillsides, rocky volcanic soils and western facing sun exposure.   This lead us to the Moon Mountain District, one of the few mountain sites in Sonoma County that could meet our exacting standards.

In 2008, we began development of the vineyard, initially hoping for 14 acres of Cabernet Sauvignon.  During the process, we faced a series of challenges and hurdles and finally settled on just 6 acres of planted vines.   The rocky, exposed location presented more issues with tons of rock having to be moved to pave the way for planting.   Finally, in 2010 we finished development and began the waiting game for the first batch of fruit.

Now a sub-appellation of the Sonoma Valley AVA, recognized back in 1981, Moon Mountain has been a source of prized wine grapes since the 1860s.  To find the Moon Mountain District you need to look up – straight up the winding narrow Cavedale road in the Eastern Sonoma hills.  Located to the east of Glen Ellen, the full moon rises over Gilfillan, at an elevation of 1,200 feet above the valley floor.

Moon Mountain is known for its thin, volcanic soils on ancient lava flows beneath craggy peaks. Exposure is extreme with Gilfillan Vineyard basking in the hot afternoon sun and receiving cooling in the crosswinds from the Pacific Ocean to the west, and San Pablo Bay to the south.

We allow Gilfillan Vineyard Cabernet Sauvignon to age for 24 months in new French oak barrels.   Once bottled, the wine receives two more years of maturation before being released.    The result is a wine in perfect drinking condition.   The aromatic and flavor profile is as distinctive as the vineyard.   Aromas of dark fruit are lifted by pretty floral and deep dried herb characters.  On the palate, the wine is dramatic and dense with spicy notes, cassis and silky tannins that provide a structured mouth feel.    Gilfillan Vineyard Cabernet Sauvignon is a captivating wine with the ability to age for more than 20 years in the cellar.

Production of the 2017 Gilfillan Vineyard Cabernet Sauvignon was a minuscule 7 barrels.